Update Oct 2016: With the new responsive email update, the carousel no longer works in Gmail

Here’s a tool that lets you build an image carousel for email that displays up to five images. In addition to the modern mobile clients such as the iOS Mail and Android 4.x Mail clients, the generated carousel works in Yahoo! Mail and Gmail webmail as well.

Unsupported clients are Outlook.com and the usual culprits Outlook 2007-2013, Gmail mobile app and Gmail for Business. These clients will only display the first image without thumbnails.

The technique behind this image carousel is very similar to the Tabs for Email example, the difference being the “tabs” are thumbnails and they are placed after the content. I wrote an earlier carousel example that uses the :hover selector that works with more clients, however that example is a lot more difficult to implement. Since this example uses the :checked selector, it won’t work in Outlook.com, unfortunately.

In the generated code, there’s a fallback section with a fallback class. The content here gets displayed to any client that does not support the carousel. The tool puts the first image there as fallback but you can swap it out with any other content such as a table displaying all images in a grid or an animated gif like the fallback for Nest’s carousel.

1) More than one carousel per email.

If you want to have more than one carousel in a single email you need to ensure that each set of radio buttons have their own unique name. For each set, change the radio input names from car-rd1 to another value such as car-rd2.

The thumbnail size was set to accomodate five thumbnails in a row. It was also set using percentages so the carousel can be responsive – it can scale with the width of its container. You can change the size and spacing of the thumbnails by changing the width and margin of the thumb class.

Here’s where you need to edit to change the default, hover and selected thumbnail border colors: 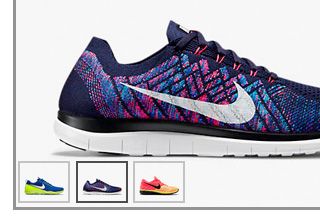 You may prefer the thumbnails to appear over the images in the carousel. I haven’t found a way to make this responsive, but if you are happy with a fixed width carousel (uncheck the responsive checkbox), you can set the the max-height of the divs enclosing the images so that the thumbnails overlay part of the image.

If enough folks find this useful, I have a few things that I’d like to add to this tool in the future such as the ability to specify fallback content, change thumbnail border colors, alternate carousel layout options and more!

No comments to show.

We use cookies on our website to give you the most relevant experience by remembering your preferences and repeat visits. By clicking “Accept”, you consent to the use of ALL the cookies.
Do not sell my personal information.
Cookie SettingsAccept
Manage consent

This website uses cookies to improve your experience while you navigate through the website. Out of these, the cookies that are categorized as necessary are stored on your browser as they are essential for the working of basic functionalities of the website. We also use third-party cookies that help us analyze and understand how you use this website. These cookies will be stored in your browser only with your consent. You also have the option to opt-out of these cookies. But opting out of some of these cookies may affect your browsing experience.
Necessary Always Enabled
Necessary cookies are absolutely essential for the website to function properly. These cookies ensure basic functionalities and security features of the website, anonymously.
Functional
Functional cookies help to perform certain functionalities like sharing the content of the website on social media platforms, collect feedbacks, and other third-party features.
Performance
Performance cookies are used to understand and analyze the key performance indexes of the website which helps in delivering a better user experience for the visitors.
Analytics
Analytical cookies are used to understand how visitors interact with the website. These cookies help provide information on metrics the number of visitors, bounce rate, traffic source, etc.
Advertisement
Advertisement cookies are used to provide visitors with relevant ads and marketing campaigns. These cookies track visitors across websites and collect information to provide customized ads.
Others
Other uncategorized cookies are those that are being analyzed and have not been classified into a category as yet.
SAVE & ACCEPT